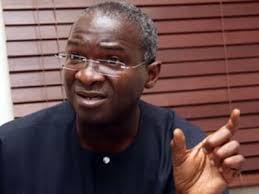 Lagos State Government on Friday banned activities of National Union of Road Transport Workers across the various motor parks in the state.
The state Commissioner for Transportation, Mr. Kayode Opeifa, disclosed this in a chat with journalists in Alausa, Ikeja.
The briefing was also attended by his counterparts in the Justice and Information and Strategy Ministries, Mr. Ade Ipaye and Aderemi Ibirogba.

The meeting was convened to highlight the operational mechanism for the newly signed Road Traffic Law in the state.
Opeifa said, “The government recognises the right for NURTW members to associate. But it believes that the motor parks should be made easy for those who want to carry out their business of commuting in the state to do so without interference.
“Henceforth, union activity is no longer allowed in all the garages in the state. What they need to do now is to operate the way other unions in the state operate by using a recognised office.”
The commissioner revealed that the development also prohibits members of the NURTW from collecting money on the roads from commuters.
“No union member should be seen on the roads collecting money from transport operators. It is illegal and this is how it is contained in the white paper adopted by the state government,” he told journalists on Friday.
He said drivers and conductors in Lagos will be required to wear uniform, adding that this is meant to improve the safety of lives and property within the state.
“Government will soon commence the re-registration of motor parks across the state. The situation where people just park vehicles in some areas and converting them to motor parks is now illegal,” Opeifa noted.
He said there will be differentiation between motor parks, garages and bus stops.
Source: The Nation Online
www.olutaller.com

Join now to receive the latest news and updates from our team.

You have Successfully Subscribed!

Your information will never be shared with any third party.